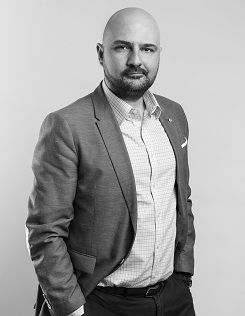 George Anagnostopoulos is a serial entrepreneur. His current ventures include 4 media/tech businesses in 3 countries, one budding startup, and the ad agency he is most known for, Socialab. He has been honored twice to be a national winner in the European Business Awards and ACQ Global Awards.
As the Founder and President of Socialab, a digital-first advertising agency, George oversees its growth along with the management team. The company, having started from 1 person, has reached maturity and recognition in the Greek market, with personnel of 55 executives and more than 90 active brands as clients at any time during the last years, while being in the Top 20 of Ad Agencies in Greece.

Mr. Anagnostopoulos started his career as a teenager in 1994, when he co-founded the first Greek “web-zine” and created digital content. In 1997, he started evangelizing online marketing across magazines and websites in the US, Australia and the UK, where he was based. In 1999, he was hired into the marketing department of Expocentric, a "dot-com" startup, which later IPO’d in LSE with a valuation that topped £70m. Three years later, in 2002, he joined the digital branch of global advertising group Omnicom.
In 2003, he started a business providing content for the Southeast European Times, a journal mainly targeted to diplomats and politicians in the Balkans area, which was sponsored by the Pentagon (United States European Command, EU-COM) and he continued for 5 years. In the year of the Athens Olympics, in 2004, he started his business on performance marketing with clients in New York, Boston and Philadelphia. A little while later, he joined Amaze, a Greek mobile marketing agency. After he became General Manager, the company was acquired by the Vardinogiannis family, in the largest-ever acquisition in the Mobile VAS industry. In 2009, he founded Socialab, a digital-first advertising agency. Starting from one person, Socialab had worked its way up from smaller accounts to brands like Lidl, Coca-Cola, Anytime, Sarantis, Lego, Cosmote, Wella, Papadopoulou and RB. In his tenure as Socialab CEO, the agency earned more than 40 awards and accolades in the Greek market, and 5 awards in competitions across Europe.
Today, Mr. Anagnostopoulos is a Course Director on Digital Marketing in the Executive Development at Alba Graduate Business School. He teaches Digital Transformation at professional and postgraduate level, including MBA and MSc. He has personally trained more than 2,500 executives since 2011, across all courses. He is a frequent speaker at open conferences and company events, as well as a frequent judge at business and advertising competitions. He is often involved as a business angel in early stage funding of startups.