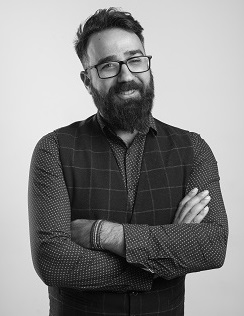 Tasos Veliadis has been Socialab’s Chief Strategist since 2012.
He has created strategies for quite a few successful campaigns, both in a digital-only or a 360-campaign environment for more than 100 brands including Lidl, Mattel, Lego, Durex, Wella, Epirus and more.
With his 17-person team, he designs and executes new campaigns which inspire consumers to share content and video almost every week. His first steps in Digital Marketing started as a blogger before joining a digital agency in 2008. In his first 3 years, his campaigns received more than 10 awards internationally. Since 2012, he has been creating the ideas behind some of Socialab’s best results, including international distinctions and accolades.
He is one of the most applauded presenters in Greece, with speaking engagements that range from TEDx to annual conferences around marketing, like All Things Facebook and the Social Media Conference. For the last 5 years, he has been a judge at Ermis Awards, and has brought in European advertising awards for his team and company.
As he likes to say, he may be the Chief, but to him Content is King!